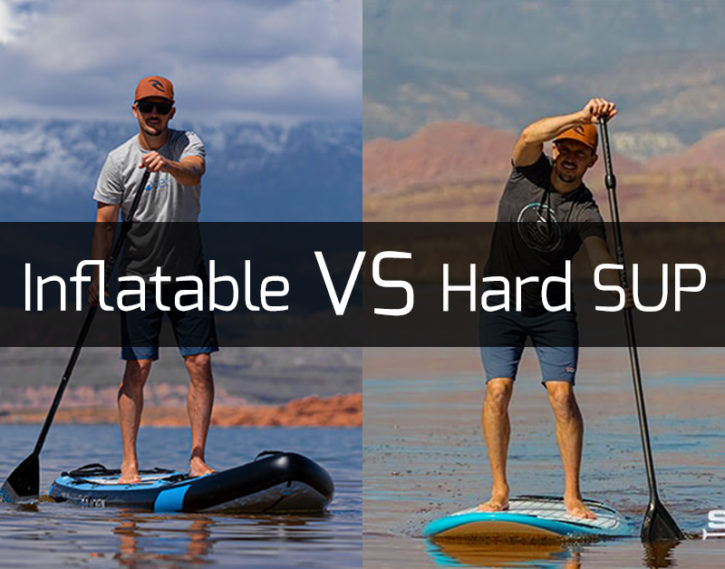 Stand up paddleboarding has been a sport that has existed for thousands of years, but it has only been in the last couple of decades that the sport has truly become a worldwide phenomenon. With the growing popularity of SUP water sports, more and more innovation has come to rock the world of SUPs as well. Among the greatest advancements have been the growing production of inflatable SUPs. For those just now studying paddleboarding, the question of whether inflatable or hard SUPboards will probably cross your mind.

The short answer? Both inflatable and hard SUPs offer their own distinct advantages and disadvantages that set them apart. Whether you’ll prefer a hard or inflatable SUP will depend largely upon things like portability, speed, tracking, weight capacity, and other important performance factors. It can be easy to get mired in all the technical details though, so here are some of the key benefits offered by each style of board to help you with your purchasing decision.

Easier to Store and Transport: The biggest advantage of inflatables is that they are so easy to transport compared to hard boards. Most inflatable SUP kits tend to be about the size and weight of a suitcase, making them easy to check-in at airports or load into your car. Your entire kit will also fit in the closet, making it ideal for those living in small city apartments or large homes alike. No oversized item airport fees, no special racks, and no having to redesign half your home like with a hard board!

More Durable, Yet Softer Than A Hard Board: Every time you drop your hard SUP or accidentally run into a rock, it is likely to scratch, chip, or even potentially shatter your hardboard. Inflatable paddle boards are significantly harder to damage and will withstand the majority of common paddle board accidents with zero to little damage. Made from military-grade PVC protecting a tight drop stitch core, the layered construction of inflatable SUPs balance firmness with durability. You’ll have more protection than a hardboard, but because of its inflatable nature be less likely to hurt yourself should you fall on it.

Inflatables are Recreational Boards: While hardboards tends to be more performance for racing and extensive touring, inflatable SUPs are better for typical recreational activities. With greater stability and weight capacity, you’ll have an easier time learning to paddle with an inflatable. The additional stability, besides the softer feel of inflatables, make them better suited for yoga as well. For the average paddler who just wants to have fun on the water, inflatables will be a better pick than a hardboard.

Hardboards Can Offer Higher Performance: While inflatables tend to offer greater weight support and stability, hardboards tend to outperform similarly sized inflatables in terms of speed and maneuverability. Hardboards tend to be faster, offer better glide, and tend to maintain momentum better than inflatables. This is because the vast majority of inflatable boards tend to have fat planing hulls that maintain the same level of thickness from nose to tail.

While hardboards can be built with a similar planing shape, they can also be built narrower, with a more pointed shape as well. Many hardboards have finely turned rails that are tapered in the nose and tail, providing better overall SUP performance while adding more volume in the center for additional SUP stability. Some Hardboards are even made with displacement hulls that cut through waves rather than riding over them, offering even more advantages in speed and tracking. Overall, hard SUPboard designers have more options to alter the overall shape of the SUP for specific sports, paddler ability, and rider weight.

Hardboards are better suited for Surfing: Hardboards tend to offer greater maneuverability and nimbleness that makes them better suited for surfing. While an inflatable designed for surfing can handle small waves, serious surfers are better off using a hardboard due to the increased rigidity. Lastly, you’ll have a better glide with a hardboard, providing a smoother experience as you catch a wave than with an inflatable.

Hardboards handle Wind Better: Light wind can have a significant impact on an inflatable paddleboard, and even in moderate wind conditions it can be almost impossible to use a SUP. While there will still be a performance loss, hardboards can handle windy conditions much better than inflatables can, ensuring you don’t have to wait for the perfect weather day to go SUPing.

Hardboards are Easier to Manage: If you have a good way to transport one, you’ll get on the water quicker with a hard board than an inflatable SUP. You don’t have to worry about inflating or deflating a hardboard, getting you in and out of the water quicker. It can be troublesome deflating your SUP enough that it will fit in your bag, a problem you avoid with a hardboard. Finally, no inflation deflation also means you don’t have to bring a pump with you, which means one less thing to keep track of when you go out.

Hard SUPboards also tend to be easier to repair than inflatables, even if they are less durable. Many of the typical drops, dings, and scratches that can damage a hardboard won’t do anything to an inflatable. However, major damage like a puncture to a seam will be more difficult to fix than a crack in a hardboard. Additionally, both inflatables and hardboards degrade with prolonged sun exposure. Over time, there can be issues with the glue and PVC material holding inflatables together, while hardboards will discolor and suffer a weaker outer layer. The problems that impact hardboards due to prolonged UV ray damage impact overall performance less compared to inflatables.

As such, while inflatables tend to have a longer shelf life than a hardboard, significant SUP damage and degradation that comes with prolonged SUP use are easier to repair with a hardboard.

Ultimately, whether you’ll want to buy an inflatable or hard SUP will be determined by the type of activities you want to do with it. If you’re looking for a more recreational, easy to use board, an inflatable is the best option. If you want something geared for high performance, and have the room to store it, a hard board will be a great pick. As rental shops can be limited in their board options, we’d recommend taking advantage of the 30-60 day return guarantee period offered by many SUP companies to try out their products and find the best stand up paddle board for you.

However, both inflatable and hard paddle boards have great board selections for getting into stand up paddle boarding. Whichever you go with, be sure to read up on the reviews of both the company and board before making a decision. We’re also more than happy to talk with you about your needs and to help you figure out the best board for yourself. Feel free to leave a comment below, or send us an email and we’ll respond as quickly as we can.

Thank you for reading, and have fun SUPing!

At SupBoardGuide.com we are a team who love the water, the outdoors, and are more than grateful that our full-time job allows us to review stand up paddle boards. We paddle year round (it helps that we are just about 2 hours outside of Las Vegas), and we bring in a wide range of paddlers with the goal of providing our readers with the best, most in-depth, and accurate stand up paddle board reviews.